I was born with hungry eyes. Hungry for colors, shapes and textures. Never resting on the same view for long, always looking for the novel, the next, the extraordinary. Obsessed with identifying everything around me, be it an animal, a person or an object, I have always been ‘looking at’. Read more

Kalasha: Life on the brink

I stretch my cramped limbs eagerly as I exit the rear seats of the offroader that transported us. The bouncy 3-hour drive from Chitral, a small city in the Khyber Pakhtunkhwa district of northwestern Pakistan, to Bumburet, the most centrally located of the three Kalasha valleys, was anything but easy. Narrow, winding passes overlooking steep cliffs, thundering mountain streams cascading below, these roads are meant for daring drivers and adventurers. 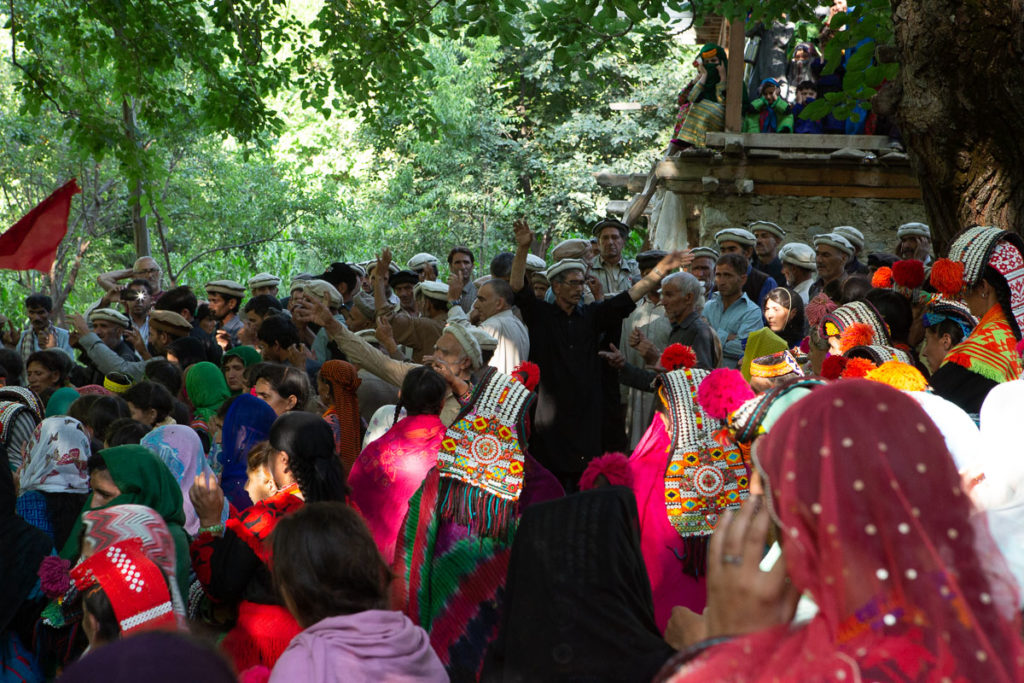 My decision to visit the Kalasha people was more of a spontaneous act than a well prepared year-long longing. So nothing had prepared me for what I was about to experience over the next few days.

My first impressions of Anish, the village where I arrived, were of a sensory kind. Purple and magenta skies above heralded the nightfall and, being the end of July, the air was sweet and warm in spite of the 2000 meters of altitude. But some very inappropriate sounds challenged the serenity of the moment. The roaring sound of the nearby mountain stream mixed up with the noise of the electricity generator of our hotel penetrating my ears, only to compete with the indistinct human calls and beating drums from the village. Our guide soon resolved the mystery: a man had died and there was a funeral ceremony taking place at the village square.

No time to waste: I left my stuff in my dimly lit room and followed our local guides through dark paths between the houses of Anish, abruptly ascending the mountain slope. On my way dozens of men and women cross our path greeting us warmly: “Ishpata baya”, “hello brother”!

Various smells fill the warm air, dried grass, wet soil, animal scent and goat cheese. Tall walnut, mulberry and apricot trees create a dense, dark, leafy canopy and there is tension and a feeling of anticipation as I approach the village square. As I arrive, the spectacle gets me. A dense multi-colored crowd is gathered under the huge trees, surrounding a woven bed on which the dead man  lies. Colorfully dressed women around, some of them with their hair untied, cry and sing mourning songs. The wife and daughters of the deceased amongst them, obviously devastated, almost faint in the arms of the others. The women use walnut branches to ventilate  the dead, this supposedly helps the spirit to leave the body. From time to time a man stands on the foot of the deceased and gives a short speech, telling of the highlights and the virtues of the dead man. And once he finishes his speech, a ceremonial circular dance begins with the beating drums accompanying the dancing crowd.

I am so immersed in the powerful scene that a woman offering me some kind of cheese almost scares me. And this was just the beginning of a 5 day journey in the Kalasha valleys, an unforgettable experience of getting to know a remarkable people and their unique culture.

The Kalasha claim to be descendants of the ancient Macedon Greeks, whose reputed king Alexander the Great used these mountain passes when he and his troops crossed the Hindu Kush to reach the Indus valley. Although there is no scientific evidence of a Greek genetic origin, there are many details in the Kalasha tradition that show the strong influence of the Greek culture. Their 12 gods religion, the deification of the natural world, the sacrifice of animals, their circular dances, the wine they drink during their festivals, the use of tables and chairs to sit and eat, all these show their indoeuropean influences.

During the next few days I had the opportunity to take a closer look on the Kalasha world. Nested among the mighty snow capped  peaks of the Hindu Kush, close to the Afghan border,  are the three valleys where the Kalasha live: Bumburet, Birir and Rumbur. Three to four thousand people comprise the Kalasha tribe nowadays. The mountain streams bring fresh water to the valleys, irrigating the fields where maize, wheat and fruit is produced. The green mountain pastures support goat and sheep herds and almost the whole population engages with agricultural and livestock work during summer, to gather supplies for the harsh winter months.  It takes a lot of hard work for both men and women and this lifestyle is reflected on the deep wrinkled and sun tanned Kalasha faces.

The seasons here are named after the natural cycles: there is the Big Cold, the Little Cold, the Moon Season, the season of the Harvest, the season of the Fallen Leaves. Spectacular festivals take place every year and the whole community takes part, with Joshi, the fertility feast, in May and Chaumos, the purification rite, in December being the most important ones. Everybody participates sporting their new clothes, offering clarified butter, wheat bread and walnuts and sacrificing animals. The social ceremonies of marriage, childbirth, adulthood and  funeral are equally spectacular with men and women taking part, unlike the rest of  muslim Pakistan, where women are mostly covered and stay at home. However, the concept of  “Pure” and “Impure” are core virtues of everyday Kalasha life. Water, goats, wheat, wine, high mountains, men are considered pure whereas chicken, muslims, women are considered impure. The same applies to places and parts of the house. The state of impurity can be purified by complex rituals, so women, for example, restrict themselves in a “Bashali”, i.e. a maternity home during menstruation and puerperium to perform their cleansing.

Equally impressive is the social structure of the Kalasha. Individual families belong to clans and marriage is permitted only to non-relatives to avoid incest.

Even the change of a husband is permitted for a woman, provided that all involved sides agree and the according material price is paid.

All these create a unique blend of experiences, both sensory and thought provoking. The fact that these remarkable men and women still thrive in a remote place without the modern comforts, relying upon each other to cope with the natural challenges they face, creating beautiful wood carved homes and sculptures, celebrating life, is a gift on its own for us. However, ecological issues, mobile networks and internet, tourism and money-based economy encroach the Kalasha. We can still have a glimpse of their magical (vanishing?) world. And maybe do something about it.

I was born with hungry eyes. Hungry for colors, shapes and textures. Never resting on the same view for long, always looking for the novel, the next, the extraordinary.

This site uses Akismet to reduce spam. Learn how your comment data is processed.